Thou Hast Half-Prevailed Against Me (Arthuriana Combat, Questing)

In this post, I laid out some setting info for an Arthurian campaign. But while GLOG works for a general grubby-grave-robber campaign, it isn't appropriate for a Romance. Have you ever heard of a knight falling into a bugbear's pit trap? Or swinging at a giant spider and missing? How many members of the Round Table have been caught burgling a house and chased away at crossbow-point? No, if you want to be a real Knight you need a more Knightly resolution system.

The way I sees it, there aren't many things a Knight has trouble doing. The general advice given to new GLOG GMs and players is that they should roll only rarely. Rolling is for situations where you are unsure of the outcome, or where time is what matters and is outside of the player's control. Rolling is for when a success and failure are equally reasonable and equally interesting*. If that isn't the case then maybe the GM should just decide what happens.

*If you tell a player "you failed" and they say "I roll to try again", failure wasn't interesting.
With that in mind, Knights should never roll for anything. If a grubby-grave-robber fails a roll they can just try something else, but failure for a Knight is significant. There are stories whose premise is "a knight tried something and failed" (see: The Knight With The Lion). Instead of leaving it up to chance, Knights should succeed or fail their checks.
Remember that Knights are in incredible physical shape (presumably the best it's possible for a human in their setting to be in) and are equally well-educated. They're also characters in a Romance, which means they succeed until it's more dramatic for them to fail. It's either obvious they can do something (because they are as capable as any human being can be) or obvious that they can't. Rolling a d20 is for plebeians.
Heck, Knights probably shouldn't even track money. Perhaps they can be impoverished, well-cared for, stupendously wealthy or unbelievably rich, but that only matters in the context of raising an army or buying a new set of incredibly fancy armor. Knights are entitled (literally "in title") to things like their manor homes, and to room and board from other Knights while traveling.

But I hear you calling out in dismay: "How, then, are we to challenge a party of Knight PCs? These freakazoid oldheads care not for cash (the essential D&D motivator) and, according to the information you have set before us, cannot fail at anything they set their hand to! Need the art of Tabletop RPG die on the rocks of the tropes of twelfth-century French Arthurian Romance?"
No, it needn't, you dipshit. Fucking dumbass. Why do I bother talking to you people? I hate you so much.

Here are some things that can challenge a Knight:
See? There are plenty of things that can challenge a Knight. Here's a few examples of problems common for GLOG PCs that would be inappropriate for a Romance:
All you need to do is keep in mind that Knights would never do anything that risks shame. That's the ultimate point I am trying to make; Knights do not roll dice on basic adventuring tasks.


Here is a PDF link to some basic conflict-resolution. Knighthood is mostly about jousting and swordfights and dragon-slaying, and so is the PDF.


As it mentions designs for shields, I shall include some banners: 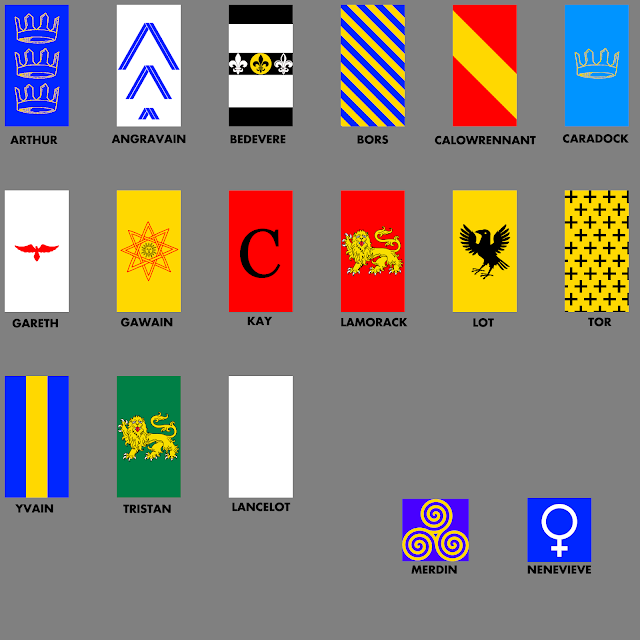 Basic rules for designing a shield: white and yellow are the metals Argent and Or; red, blue, green, purple and black are the colors Gules, Azur, Vert, Purpur and Sable. You can put a metal on a color or vice versa (that is, have them touching), but because of limitations in cloth-dying you are not supposed to have colors adjacent to colors or metals adjacent to metals. Simple straight lines or geometric shapes are your best bets for charges (the symbols); those who include animals do so at the mercy of the "artist" painting your shield. You aren't supposed to put writing on your shield but I guess Sir Kay didn't care.

When Medieval Europe invents heraldry (some four-hundred years after King Arthur) there will be all sorts of rules about animals, mottos, flowers, and other details that make for an actual hatchement; what you see above are simply coats-of-arms intended to be displayed on a shield or banner to help identify the knight at a distance.