It is becoming difficult for me to navigate my own blog. Therefore shall I lay out an index for ease of reference.

The OSR Discord did a city-building challenge several months ago. Check out a few of the other cities here and here. You, as a reader, are therefore required to forgive me for this exercise in my own amusement. 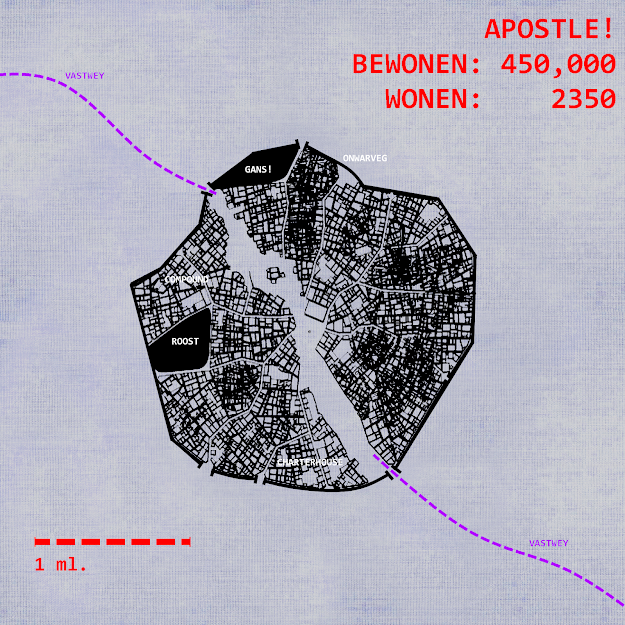 The Apostle seized the holy city from the armies of the dead in a battle which lasted for five days and five nights. He heaped up cords of bodies high and wide, and the ancient streets flowed turgid with old blood to an apple's depth. No human force could have accomplished this miracle of violence. Only through divine intervention was the city successfully reclaimed.
Apostelene is, of course, not a "natural" city. It was never a watering hole for wandering shepherds, or a fortified camp at some crook of river and road. The g_ds themselves laid its corner-stones at the place of their choosing. This is all to say: Apostelene stands in the middle of a plain with no convenient natural structures and no easy water access. But who is so wise to question the decision of the g_ds?
The traveler will first see the legendary city by its impossible walls, which loom eighty feet high and forty feet thick. The lichen-gray adamantine stones are incorruptible, but the mortar was not. Much has been dismantled for greed's sake. The surviving allures are dotted with the camps of merchants and mercenaries. At night their hearthfires can be seen for miles, and during the day the smoke is another great wall around the city. The road leading to the great gates is likewise ancient. It was made broad enough for carts (some eight feet across on the straight, sixteen on the curves) and the hills were cut so it might lie level. The original stonework was pink granite, masterfully done, but the new lords of the city have patched it here and there. Where age buried the old road, the way to the city of the Apostle is a path worn in the dirt.
The gates themselves are plain wood banded with iron and are conspicuously too short for their archway. The original gates would have been imposing and terrible — but they were smashed down in Ages past by some hideous misfortune, and lie warped and ruined just inside the wall. None can shift their adamant weight. Finally, when the traveler reaches the inside of the city, his eyes will meet with wonder the houses of the g_ds. Kings claim the purest descent, and it is true that they are the tallest men, but Apostelene's grave-bound builders made houses for true giants: no lintel in the city is lower than ten feet. The gutters are so deep as to serve the inhabitants as canals, and in the ruined buildings stone furniture dwarfs the merely human. Apostelene surpasses its new occupants
For Apostelene is occupied, by the Clerics of the White and Black Masks. This alien, semi-divine city on the edge of civilization is perfect for them. One may meditate on its empty miles of street and consider mortality (or, more practically, smash into an abandoned building and convert it to a workshop or storehouse). No one will bother them because no one else is interested in this time-gnawed corpse of a city.
Was Apostelene ever fully inhabited? When could its labyrinth-like structure have been justified? Certainly its tiny population of clerics and enterprising adventurers cannot fill it. At night, civilized men cling to the walls and safehouses, and the heart of the city is left to moulder. How many generations must have passed since death seized this city, and its roofs caved in, and fierce lightning chased the thunder in its streets, and its temples were scarred by the storm and swept bare by the wind — and oh, was it beautiful once.

White Mask Chapterhouse
This building must have been a palace when the city had bluebloods. The Chapterhouse is three stories high but for where the belltower reaches six. The walls are marble and the bronze cherubs are scrubbed carefully by portly acolytes. Despite the desolate surroundings, the Chapterhouse is a patch of comfort and life.
The White Masks keep a large presence in Apostelene, but this is primarily in the service of their black-mask brothers and sisters. A wanderer (such as a PC) can hope for clerical services at reasonable rates. There is a slight risk of being pressed into some small errand; the White Masks never have enough hands around.
Services Available Inside:

Black Mask Compound
This part of the city must have been a private... something. The wall is high, adamant, and ringed with razor-edges like the teeth of a trap. Something within is always making a sound — a cheering crowd, a screaming orator, the clashing of practice swords, or the resonance of a hundred voices praying the hours. There's a statue at the front gate of a cloaked figure bearing a sword still wickedly sharp. The cloth is lovingly shaped from white marble, but the deathshead is a crude thing of lacquered iron.
The Black Masks keep a gigantic presence in Apostelene. As a major fortified city three days from the frontier it is an essential staging point for their efforts to burn out the dead. This in turn attracts merchants of weapons and supplies, The Black Masks require munitions in huge quantities. They never seem to be able to keep any cash on them, but the merchants don't mind (the IOUs are much more valuable than glass).
Paladins Causing Trouble:
Public Market
Here the hawkers and the sellswords and the troublemakers congregate to argue and gossip and fight. It seems you can buy anything in Apostelene, except whatever you are actually looking for. Since the clerics form an effective monopsony on bulk equipment, the prices of small (party sized!) amounts fluctuate wildly but are usually high (check at dawn: they cost 1d6*.5 the normal amount). Any specific type of object a PC can name is available for 4x its normal price, at any time of day or night, no matter how unlikely.
The Road Out

Apostelene shrinks in the east behind you. Before you lies hundreds of miles of rough wildlands broken only rarely with the degraded and debased remains of imperial power lost. And beyond those wildlands are the terrible mountains, which stretch their brooding forms over the western sea. As a child you were taught the Great Sage came out of that Hellish country to preach that Man was not abandoned by G_d, that there was hope yet, that a new age of struggle was only just beginning. Are you a believer in that new age, marching west to reclaim the waste-places of the world? Or are you another plunderer here to steal the boots and gold teeth of those who went before?
However you answer there is a more immediately pressing question: whether you will find shelter before dusk, or be caught on the road by night and join the armies of the dead. Use what time you have to prepare. There are many sunsets waiting, if you are clever enough to see them.
Posted by G. R. Michael at 9/19/2020 03:26:00 AM No comments:

The Zouave, by far my most popular post, has a mere 12 tall tales. This post will repair that grievous error with another dozen stories that may very well be true.