The year is 2013, President John Edwards has just won his reelection, and you have superpowers.

You live in fabulous Bayport, NY. In some worlds this is a small town like many other small towns on Long Island; in yours it is a decaying industrial city of a hundred-thousand souls (and twice as many people, HA!).
Plagued by organized crime, ground under the boots of vicious corporations, "protected" by an ineffective police force held together by corruption and graft, Bayport is the perfect city for an up-and-coming superman to make a name for themselves. 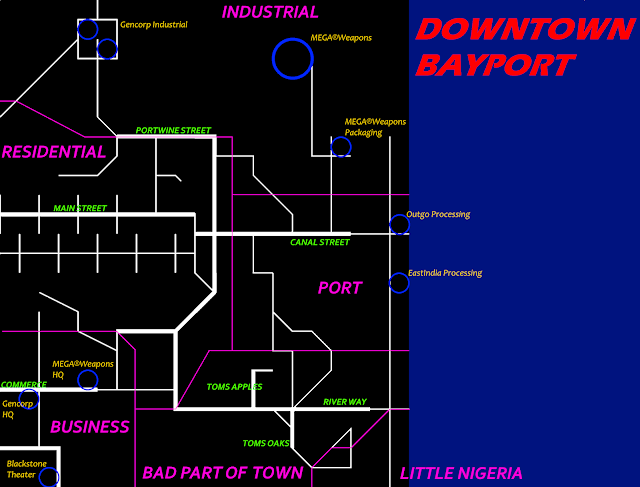 The first supermen were veterans of the Great War. They were regarded as urban legends by the people of the era, who still received most of their news from weekly papers, until Boltcutter arrived on the scene. He was as fast as an automobile, and hit harder! Nothing less than a bursting shell could pierce his skin! He could clear a city block in one leap! With his sidekick Concrete Lad (who gained his powers by falling into liquid concrete) he fought Hitler, Mecha-Hitler, Ultra Mecha-Hitler, and the Son of Capone. As more supermen appeared on the scene, and Boltcutter grew in renown, vigilantism was effectively legalized at the federal level by the passing of the Othello Act. Thus was born the second generation of superheroes.

As the Cold War between the first- and second-world continued into the 70s, supermen became more and more essential to the effort on both sides. They likewise became more popular, and many supermen of the period were made into household names by their media presence and pop culture appearances. But as this was happening, the world became darker. What defenses are there against a man who can read your mind as he walks by you in the street? How do you fight someone who can predict your decisions before you decide them?

Obviously, with supermen. More and more emphasis was placed on individual people (and their individual caprices) to ensure the defense of the nation, industries rose to capitalize on what powers they could, countries became more reclusive, more secretive, and less trusting, and the walls closed in.

By the 90s, when Boltcutter died, the future wasn't what it used to be. Supermen were corporate assets, or arms of the military-industrial complex (to whatever degree those were different things). World governments were paranoid and hostile. Urban areas were swarming hives of violence and degeneracy; rural areas were scarred by industrial exploitation, super-powered feuds, or open war.

By 2013 things are looking grim. In America major corporations operate almost entirely outside of the law. Times are hard for the common man. Most people live paycheck to paycheck, or meal to meal. There are still opportunities in the world, but it just seems like there's less than there should be, you know?

Well, in the end it's like Boltcutter II (CEO of MEGA®️Weapons) likes to say: "Shit into one hand, wish into the other, and see which hand fills up first."

Hey That Sounds Cool, How Do I Be A Super Guy?

I'm glad you think so and I'm glad you asked. The main concern for being a super guy is having super powers, which I will now explain:
The powers of a superman fall into eleven categories: Brawn, Durable, Martial, Think, Perceive, Create, Shift, Fly, Zap, Weird, and Ace. These categories exist "in-universe" and are used by supermen-hunters to calculate how expensive their hits will be.

I Didn't Understand That At All, And It Doesn't Sound Fun?

Yeah I know, I have not thought of a good way of presenting it. Perhaps "an eleven-category descriptive (not prescriptive) point buy system for generating supernatural abilities of roughly equal power, compatible with your basic d20-like games, with a Worm flavor." It is fun though.

What If You Had Some Examples?

That's a surprisingly good idea, voice-which-follows-me-and-ceaselessly-complains. Let's look at some examples of past characters:

Foresight — one-sigma. Perceive I, Zap. A nursing student by day, his costume was spare scrubs with hundreds of googly eyes hotglued on. Played up a "precognition" angle, but his powers were the ability to perceive time much slower and to project spasm-inducing nerve-rays from his eyes. Combined, these made him seem like a kung-fu master. Also used his powers to cram studying in between superhero exploits.

Barrietta — one-sigma. Fly, Zap.  Explicitly described to me as "that one girl from Young Justice with the forcefields". Technically had the power to create damage-absorbing forcefield fences, but only ever flew around and shot at people with a normal gun.

Slugger — one-sigma. Brawn 1, Martial 1. Wore a baseball uniform and carried a composite baseball bat. He lasted for one session before his fellow heroes zapped him with a brainwashing ray they stole from a cult leader and then tried to beat him back into normality with a wooden bar stool, killing him.

Snakecharmer — one-sigma. Martial 1, Zap. Raised in a circus, was a master of throwing knives and juggling and could control light metal objects at a distance of a hundred feet or so. Used a length of razorwire as a telekinetic grappling tool. After being shot by a cocaine cartel, Massive Damage rolls took his leg off and the player quit in a huff.

Sinkeda — two-sigma. Brawn I, Durable I, Martial II. Could run on walls for 30' at a time and threw big knives with +8 to-hit. Costume was a doofy sweater and a champion belt, both lined with hidden pockets/holes for the dozens of knives he kept strapped to his body.

These are examples from the lower bounds of power, appropriate for level-1 PCs and their enemies. Here's an example at the other end of the scale:

Supercarrier — four-sigma. Brawn III, Durable ב, Martial I, Weird. Hits like a train, difficult to kill like a train. He can "hold on" to air and swing around like an acrobat. Jumpruns very fast. Smashes.
"Hits like a train" sounds like hyperbole, but it is not. Supercarrier weighs well over one-thousand kilograms in his socks and can accelerate to 200mph over the course of forty feet. His blows do not crush you; they aerosolize you. One shoe goes this way, one shoe goes that way, and the rest of you is reduced to a rapidly expanding cloud of damp particulate matter. Poof.
He wears an additional two-thousand kilos of tungsten-steel armor. This is not to protect him, because he is a Durable ב. He shrugs off any weapon that a human being can operate. The weapons that threaten Supercarrier are the kind which are launched by a human, or by two humans with two separate keys and a big red button. The armor is just to give him more inertia and a place to slap a bumper sticker that says I DON'T BRAKE FOR LAWYERS.
Like many carrier-class supermen, he wears a long-range GPS tracker in case he falls into the ocean so he can be recovered with a big crane like a chunk of the Titanic.
Supercarrier can't fly domestic. He needs to be chunked around like a payload, and there are special silos in Kansas to fire him up on the tip an ICBM. Think of him like a fifth branch of the U.S. military: Supercarrier isn't as versatile as, say, the Marines, and can only be in one place at once, but he could kill as many Marines as he could catch and they probably wouldn't have any way of stopping him.

I'm going to end this post in an unorganized sprawl of miscellaneous rules, so buckle up. These were written for 5e originally; characters get one "action" and one "bonus action" every turn. All ballistic weapons have exploding damage dice (if you roll maximum damage, roll the dice again and add the sum).

Recoil (noted RX, where X is the value) is the minimum strength mod required to effectively use the a gun. If your strength mod is too low, you suffer a to-hit penalty equal to the difference. Ignore recoil if the gun is mounted securely, -1 effective recoil for a long barrel and a stock, -2 for holding the gun in two hands.

Magazines and speed loaders cannot be refilled during combat.

Light, medium and heavy are as in standard GLOG (⅓ 1d6 damage can be thrown, 1 slot 1d6/1d8 damage in one or two hands plus strength mod, 2 slots 1d10 damage in two hands plus strength mod).
Automatic guns expend 1d10 rounds in an attack with +1 to-hit. You can expend another d12 rounds for an additional +1 to-hit. They reload as semi-auto.
Double-Barreled weapons have two barrels each holding a shell. You may fire or reload a barrel with an action or bonus action. Firing both barrels gives advantage to the attack.
Long guns cannot be used in melee range.
Pocket weapons have no encumbrance cost. Advantage in melee range.
Revolver weapons reload from a speed-loader with an action. If you don’t have a speedloader, you can reload 1+[dexterity mod] chambers with an action.
Selective weapons can be treated as automatic or semi-auto.
Semi-Auto weapons fire once on an attack, and reload from a magazine with a bonus action.

Some armor grants bonus Armor Class making you more difficult to hit, others grant Damage Resistance applying a penalty to every damage die, others just give you Ablative Hitpoints and are wrecked before your actual hitpoints are touched.