This is info for an ongoing campaign and may be of only slight interest to you, dear reader. But, nevertheless, I endeavor in all things for your amusement and your viewing pleasure.

Aeshe, Umbersheen, Arel, and Lussen are languages and shared cultures. King is a language and culture which they don't like to share. There's a pretty solid Aeshean Empire (both the country and the language are named after a religious figure), but besides that the world is mostly scattered with princedoms and baronies that might not fill a single six-mile hex (~20,000 acres).
I promised a player some meaningful mechanical differentiation between races, so here's my attempt at doing that without introducing full demihumans into the world.

For all races: if your INT is at least 7/+0, you can read and write in your own language. At 12/+1 INT you know an additional language.


Aeshean
Imperial subjects tend towards the tall and sturdy, with bronzed skin and work-hardened hands. They were the g_ds' most highly-favored, once, which is why their empire is so broad and they have so many skilled practitioners of the supernal arts. Their Church is the preeminent religion now that the old g_ds are gone, but many still worship dead Timotheos in their homes. Red Heretics are common here.
You get +2 MOVE for being an Aeshean. If you can see the sun you know how long until dusk, and if your CHA is 12 or more you know the time even underground.

Umbern
These are the slight, fair-haired people of the east half of a narrow land bridge, divided down the middle by an imperial road. Their part of the world is broken highland and moor, and they spend most of their days fighting brutal civil wars over sheep. Umber (the country doesn't have the "n") produces sturdy warriors and little else. They are ardent followers of the Church, but Green Heresy is still common.
You get +2 HRTS for being an Umbern. By ignoring your body's pain receptors you can sacrifice 1 HP to gain a second melee attack in combat, and if your CHA is 12 or more you eat half as many rations as anyone else.

Shee
These are the willowy, dark-haired people of the west half of a narrow land bridge, divided down the middle by an imperial road. Their part of the world is densely wooded lowland and swamp, and they spend most of their days shooting at deer or Umbern. Sheen (the country has the "n") produces bold hunters and little else. They are ardent followers of the Church, but Blue Heresy is still common.
You get +2 SNEK for being a Shee. Experience and a stern eye gives you an extra 10' of range from your weapons, and if your CHA is 12 or more you can tell people apart by scent.

Arelian
Staunch plebiscitaries bearing gray hair and skin, proud of suffering under the most advanced Democracy in the known world. Every three years, Arelians elect an Undeniable Dictator who sets all taxes and spends all taxes. There are no term limits, but unpopular dictators may find themselves executed by their successor. Orthodox monasteries are common in these parts. So are harems, forbidden by the mainstream Church but common among Purple Heretics. Arelians are a complicated people.
You get +2 SKLL for being an Arelian. You know an additional language and can read any language you can speak. If you have 12 CHA or more you know a primal language of the spirits, and can speak with wizards and demigods.

Deltan
Natives of the rainforests and wetlands of Icorn. Originally short, ruddy and dark-haired, but most are at least part Aeshean after centuries of subjugation. They recently threw off that subjugation; this has everyone worrying. Have their leaders made deals with Wizards? Will Chaos soon have its own kingdom in the world of Man? The Deltans are just happy to be free. Most are Yellow Heretics.
You get +2 INIT for being a Deltan. You swim like a fish and can climb trees like ladders, and if your CHA is 12 or more your jump distance is doubled.

King
The arrogant precursors to modern humanity. Lanky, ruddy, bearing hatchet-noses and shaved heads. The Kings (claim that they) were the ones who built the ancient cities, (say that they) named the nameless hills and dells, and (may have) raised the first temples to the old g_ds (if you believe them). They (claim to) rightfully own all ruins, all artifacts, all cities and all territories. As other peoples ignore these claims, most Kings live as wandering vagabonds and mercenaries. Kings still worship the old g_ds and have a generally hostile relationship with the Church of Aeshe.
You get +2 SAVE for being a King. Martial training from an early age gives you a permanent +1 to-hit, and if you have at least 12 CHA you recognize ancient artifacts immediately and can generally guess their value and origin. 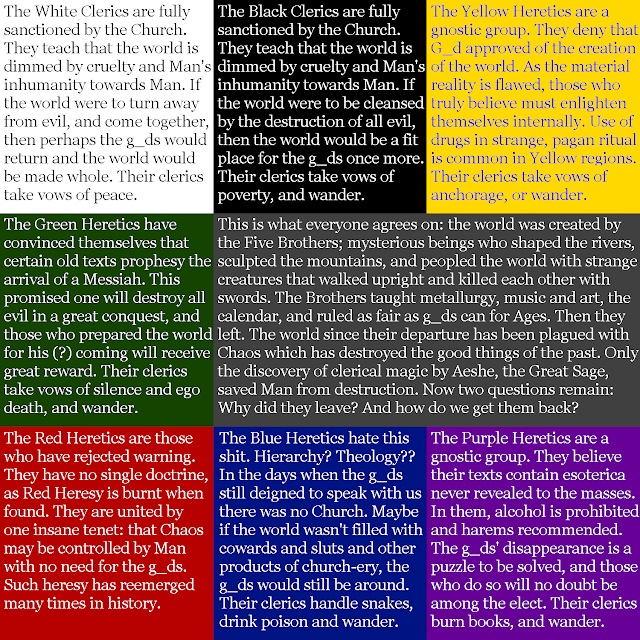 Things You Need To Know: