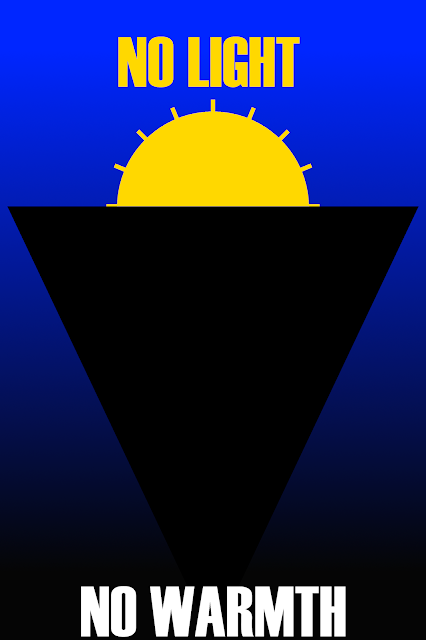 "A generation ago, the famous Klohr Expedition was formed to descend down the shadowy southern Face of the planet — which is, as everyone knows, an inverted tetrahedron. They made excellent progress, despite the antiquity of their maps, and discovered fascinating ruins from the ages before mankind. Then communication was abruptly lost.
With the advent of new technologies, and a resurgence of interest in the fabled Losian Relics, the Klohr family has gathered enough funding for a second expedition. They, too, will descend the southern Face. They will recover the bodies (or discover the fates) of Klohr's group, and they will reveal the secrets hiding at the very bottom of the world.
Main concerns: First, the Face is cold and perfectly dark. It has never seen the Sun. Anything that makes its home in these conditions must be horrible indeed.
Second, your party is descending down a highly irregular climb. On occasion there will be caves, or slippery paths of ice. Other times you will be free-hanging from ropes and swinging to the underside of inverted cliffs.
Third, the Klohr family expects results. They are putting their hopes and the last of their money into this. They want maps. Notes. Closure."

Something like a Veinscrawl or a Darkest Dungeons run. An inverted mountain climb in an extremely hostile environment, while picking up the pieces of a failed expedition.

A few classes have been prepared. I've done the up the Monkey Herder, who will no doubt be useful while descending the Face of the world. The Mad Queen's Court did a Blue Heretic, a variety of paladin too stupid to get cold. Mihau, an OSR Discord user, prepared the Vertical Ranger. I have recreated the Vertical Ranger in my ruleset for your amusement and edification:


Your order was founded decades ago to serve on the Barrier, a mile-high and mile-thick wall which runs across the northern end of the continent. At first the only tools they had were grapnels and ropes. But the development of the Pneumatic-Grip Pants opened up new vistas, and many Vertical Rangers accompanied Klohr on the disastrous expedition.
As a Vertical Ranger, you are proficient in pistols, knives, picks and grenades. You can wear light armor and use shields. If you fall off a cliff with a canister remaining you instantly latch back on, taking 1d6*5 feet worth of fall damage if you swing into a wall (if this distance is higher than the cliff, you hit the ground and then reel back up to the top).


PGP Experience
You carry a treasure of your order: a pair of PGP. These things are difficult to use - imagine half-a-dozen steamjets strapped to your junk which are activated by flexing specific thigh muscles. They launch grapnels which seize on to pieces of the environment. Even the sheerest surfaces may be accessed through pants.
A PGP is loaded with two pressurized canisters (on the hips, you freak) which are used to fire a cord and grapnel fifty feet. When you do so, there is a 3-in-6 chance of depleting it. Canisters may be refilled with two hours of pumping. Spares (pulled off of dead Rangers) occupy ⅒ of a slot. Cords are launched instantly and reel in at a rate of one second per five feet.
Like all surviving PGP yours is a hack-job of tweaks and malfunctions held together with hasty patches and prayer. Roll once on each of the following lists to determine the initial state of your PGP. You might invent new tweaks with the approval of your DM.

Swapout
Though the company that makes the PGP went out of business years ago, and its scientists all boarded the same ship and were drowned at sea, and its CEO was executed for tax fraud, and the whole thing was covered up by the government... sorry, getting sidetracked. There are plenty of dead Vertical Rangers hanging splattered against a wall somewhere. With a few spare parts and four hours of fiddling, you can reroll a malfunction or tweak. You might even discover new malfunctions on someone else's PGP rig. Only you have the skill to alter these pants safely.

Horizontal Viability
You've fully mastered the use of your PGP with your feet on the ground. You can triple the length or height of a jump by using a canister. While attached by your pants to a wall, you may walk and run as if it were solid ground.

Rapid 3D Movement
You've fully mastered the use of your PGP while flying through the air. While moving around at cord-length, ranged attacks only hit you on a critical. You may fully expend a canister to move to any point within the radius of your cords. Remember the risk of fall damage from swinging into walls. The closest humanity has ever come to flight will, of course, be the death of you.

The corpses of Vertical Rangers are scattered across the Face of the world. Some serve as landmarks.


Xenophon of Athens prepared some GLOG-compatible climbing rules, and I really like them.

Really want to run a weird reverse-Everest climb. Very excited by the prospect. Incensed with thought. Here's some weird NPCs you might meet on the way.